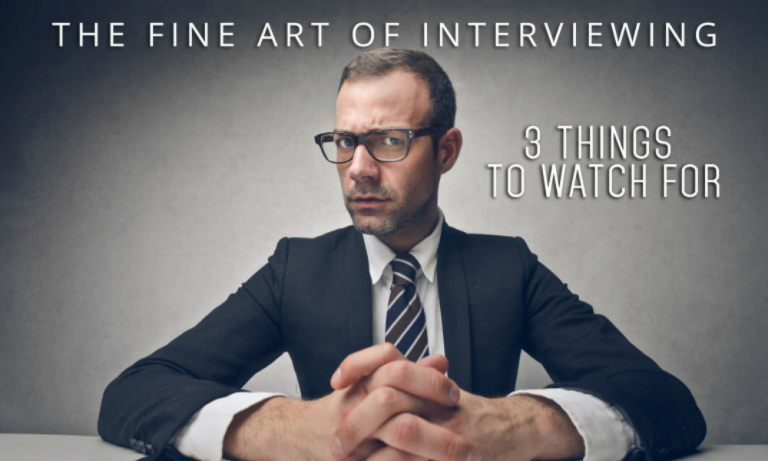 The Fine Art of Interviewing: 3 Things to Watch For

Being interviewed can be daunting but being the one conducting the interview can be just as challenging. Whilst a candidate is doing their best to impress, you’ve got to do your best to spot any potential flaws.

It’s a very well-known dance, they’re trying to charm their way into your company and you’re trying to throw a few curve balls and see if they can handle them. We all know the obvious things to watch for, like late arrivals and messy attire, but what are the trickier and equally telling signs to watch for when interviewing?

Can they think on their feet?

The key thing to remember about interviews is that they are essentially a performance. There are even scripts - generic interview questions that can be rehearsed and planned for well in advance of the actual meeting. This is all fine, in fact it’s good to ask standard questions, because if a candidate hasn’t made the effort to plan for the most obvious questions then is that really the kind of person you want on your team?

Yet the flip side of an interview that sticks very much to a script is that plenty of people can hide behind their well-rehearsed responses and you of course end up being wowed by someone who may only be capable of working within very clear lines. Again, that’s all well and good but we all know that quite often (usually on a Monday morning before the coffee is cool enough to sip) that these nice neat lines can go haywire and that means you need to be able to show some initiative and carry on.

A good indicator of a candidate who will be able to think on their feet and use their initiative is their ability to answer a completely random question that they could not plan for. Be creative, ask the most bizarre question you can and see what they do. Their answer will show you how bold they are, how innovative and how much initiative they’re likely to show. We recommend trying out: ‘If you could be any mythical creature what wouldn’t you be and why?’

What do their eyes tell you?

People who drop eye contact enough to make you notice are often under-confident, anxious or uncomfortable. A few nerves are to be expected of course and you certainly don’t want too much eye contact, so it’s about finding the balance. If their level of eye contact doesn’t come across as unusual, either too much or too little then your candidate can have a gold star, but there’s a little more to the significance of eye contact then that.

If you’re conducting the interview as a group, then be sure to watch how the candidate treats the people who aren’t speaking to him or her. Does she glance at everyone briefly when answering or speak only to the person who’s asking the question? Are they avoiding meeting the eyes of someone in particular?

People who don’t meet everyone’s eyes when they speak, even briefly, tend to be people who aren’t good at playing as a team. Similarly someone who is happy to not grace a particular person with eye contact is also someone who is more likely to exclude other people in bigger ways.

What words are they using?

The words people choose to use are potentially very telling (a shock we know). When you interview a candidate be sure to take note of how they use the words ‘we’ and ‘I’. If you’re asking them to give you specific examples of their talent, perhaps problem solving or being particularly innovative, it’s pertinent to prick your ears up at someone who chooses to use the word ‘we’ in response to something that should initiate an ‘I’. People who are struggling to think of an example they were actively part of will often use ‘we’ and instead relay an example they were on the periphery of.

By the same token people who struggle talking about themselves will also lump themselves in with a generic ‘we’ when asked for specifics. To be sure of what kind of person you’re dealing with, persist, push for that specific answer and see what you find.

There’s no fool-proof way of knowing how good a person is going to be for your company. The best thing you can do is take all these ‘signs’ with a pinch of salt and go with your gut. If the person feels like the right fit and your colleagues raise no complaints, then chances are you’re on to a winner.

3 Simple Ways Your Business Can Engage with Customers Better Online

3 Business Catastrophes That WILL Happen with Poor Phone Call Handling